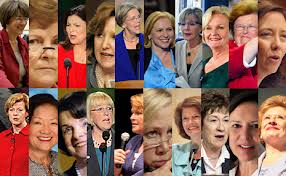 Let’s get these numbers up to 50%. Obviously, all female politicians aren’t pro-choice, including Senators. With so few women allowed into power, it can be easier for women to achieve with an anti-woman agenda (See Sarah Palin.) But the more women we get into government proportionally, the more supportive the government will be of women. It’s pretty impossible for a country with women in only 16% of power positions to be pro-woman.

About those losses, Richard Mourdock (“And even when life begins in that horrible situation of rape, that it is something that God intended to happen”) Todd Aiken (“If it’s a legitimate rape, the female body has ways to try to shut that whole thing down.”) Joe Walsh (“With modern technology and science, you can’t find one instance…there’s no exception for the life of the mother”) perhaps the Republican party should reconsider its policy and start treating women like human beings.