While walking in San Francisco’s Crissy Field this morning, I was stunned to see the informational display about climate change defaced by graffiti reading “LIES” and “big government hoax.”

Instead of learning how to reduce our carbon footprint, why sea levels are rising and the impact of that, or how to protect the birds in the area, students who visit the park today will see graffiti claiming climate change isn’t real.

Just days ago, I read a story about another park in San Francisco defaced with swastikas.

Known as a sanctuary city and the home of Nancy Pelosi, San Franciscans sometimes think the “left coast” is inoculated from Trump’s virus of hate infecting our country. The frightening trend of graffiti in our local parks shows there is no protected place. 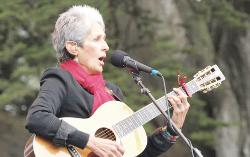