Before I write one word about my thoughts on the fifth book in the Harry Potter series, Order of the Phoenix, let me be clear. I bow at the feet of J.K. Rowling. She is a masterful storyteller. I am already onto Book 6. I can’t stop. I should say that my nine year old daughter is appalled that is has taken me months to complete Order, a book she finished in three days. My slow pace has forever shattered her view of the talents and skills and grown ups. We have our limits, now she knows. In my defense, I’m always reading about 7 – 10 books simultaneously, but this fact means nothing to her. She just shakes her head at me, her eyes sad. 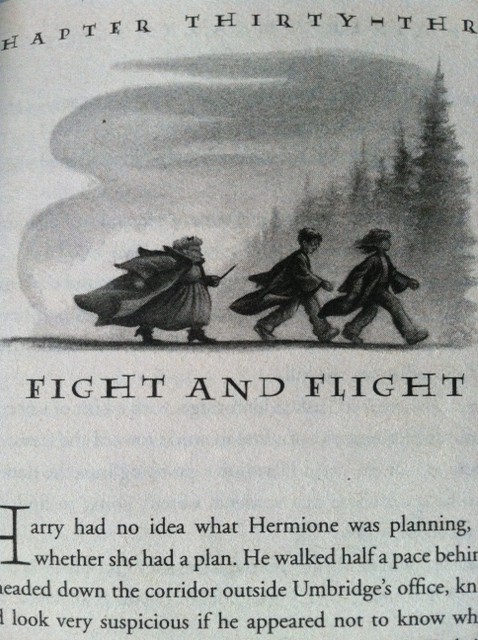 In this fabulous installment, Rowling addresses a few of my on-going gender complaints with the series: no female Dark Arts teacher, no female head of Hogwarts, no super evil female villain, and no female Quidditch captain. With the wicked, Dolores Umbridge, Rowling creates a villain so wicked that reading about her made me feel weak in my knees.

Umbridge fascinates, in part, because she takes on typical characteristics of femininity: she is often seen in pink, speaks “sweetly,” often with a ladylike “ahem,” before voicing yet another shocking decree. Umbridge’s office is sickeningly prissy:

The surfaces had all been draped in lacy covers and cloths. There were several vases full of dried flowers, each residing on its own doily, and on one of the walls was a collection of ornamental plates, each decorated with a large, technicolor kitten wearing a different bow around its neck.

Swathing this evil woman in fluff reveals that “sugar, spice, and everything nice” is a put on, not just for Umbridge, but no one can live up to this persona. Lace, kitties, and a quiet, “polite” voice is simply another studied costume.

When Harry insists Voldemort is alive, he is sent to Umbridge’s office for detention to do lines in a chilling scene:

“You haven’t given me any ink,” he said.

“Oh, you won’t need ink,” said Professor Umbridge with the merest suggestion of a laugh in her voice.

Harry pressed the point of the quill on the paper and wrote: I must not tell lies.

He let out a gasp of pain. The words had appeared on the parchment in what appeared to be shining, red ink. At the same time, the words had appeared on the back of Harry’s right hand, cut into his skin as though traced there by a scalpel– yet even as he stared at the shining cut, the skin healed over again, leaving the place where it had been slightly redder than before but quite smooth.

Harry looked around at Umbridge. She was watching him, her wide toadlike mouth stretched in a smile.

And on it went. Again and again Harry wrote the words on the parchment in what he soon came to realize was not ink, but his own blood.

Creepy! I had to put the book down at that point and go consult with my daughter on the high level of Umbridge’s madness and meanness.

Important, complex female characters in Order don’t stop with Umbridge. Luna Lovegood, the misfit, smart, intuitive girl who befriends Harry has a real, spiritual connection with him, so much so that I would call actually them soulmates, in a non-romantic way. One of my favorite parts of this series is how Rowling creates cross-gender friendships and partnerships with no romantic tension clouding the relationship.

And then, with Angelina, finally, we get a female Quidditch captain. I was psyched to see a female in this part, but I can’t say I was that impressed with Angelina. She whined a lot and didn’t do much to save the team. Similarly, I was disappointed with Cho, Harry’s romantic interest who devolves in this book into a hyper-sensitive, sniveling, annoying character. At the very least, I wish Rowling could’ve written a scene or two showing how good Cho is and how Harry is in awe of her skill, is attracted to her because she can play, not just because she is pretty.

Tonks is a new witch on the scene, but I have to say that her klutziness reminded me of one of my least favorite characters in kidfiction, the good hearted imbecile, Amelia Bedelia.

At the end of the book, we meet Bellatrix Lestrange, a horrific, terrifying character who murders the brave, loyal, but arrogant Sirius. Though sad at Sirius’s death, and so sad for poor Harry, I was pleased to see a female be so instrumental in the plot as clearly, that means Lestrange is a character who will stay important to the action of the book.

Chapter Thirty-Three, pictured above, shows an image rarely seen out of the Pink Ghetto in kidlit: two female characters to one male, and he is not in the lead. The opening text underscores Hermione’s important position:

Harry had no idea what Hermione was planning, or even whether she had a plan. He walked half a pace behind her as they headed down the corridor outside Umbridge’s office, knowing it would look very suspicious if he appeared not to know where they were going.

While I think Hermione’s role will always be loyal friend, I like how she got to play her part in this book. Hermione essentially figures out that Voldemort is luring Harry into a trap and  she warns him, yet Harry refuses to listen. This is an important role in the story, and I’m glad Hermione gets to play it.

So bottom line: Order is the best book for females so far in the Harry Potter series. Still, as I keep writing, clearly, this is Harry’s world. The rest of us just live in it. Thank you, Rowling, for allowing us the visit.