Susan Prasher wanted to dress up as Darth Vader for Halloween. Her 7 year old son told her that the costume was not appropriate for “a girl.” Here’s her story. 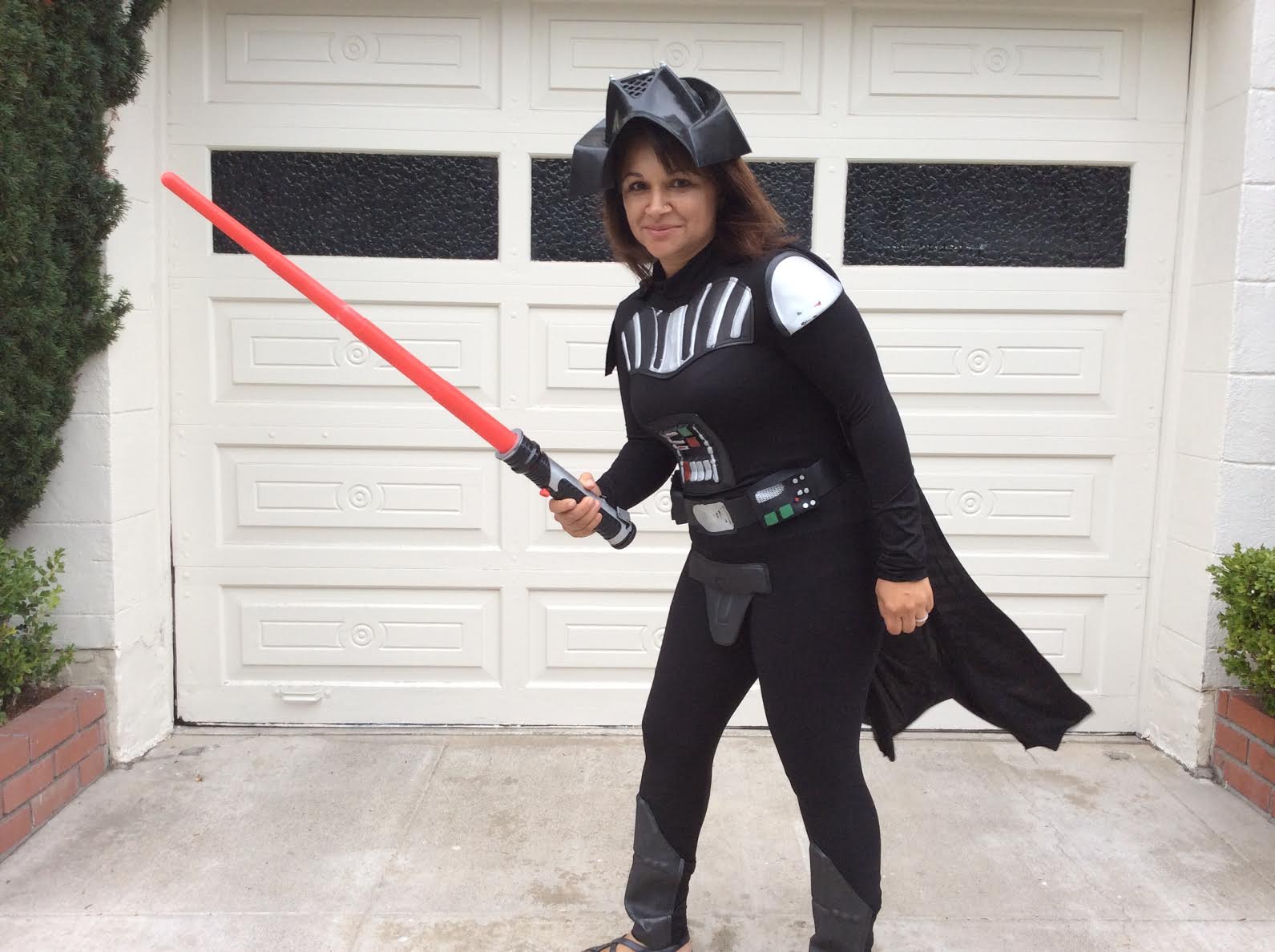 Growing up, I never had a doll, a Barbie or a princess dress. As a mother and a former teacher, I have seen children verbalizing, practicing and sharing experiences of social interactions with the use of dolls, which is really wonderful and joyful. One can definitely learn a lot by observing and listening to children at play with these types of toys. One thing that throws me off guard are the sheer number of princesses. With each princess, there is a new dress, a story line, and possibly a tiara. I get confused with which princess represents which movie. I’ve had the good fortune of having a best friend’s daughter explain why she felt sad that I didn’t know about the princesses and proceeded to break it all down for me. Perhaps all the role playing actually encouraged her to be an empathic person that understood and heard me.

One of my boys is obsessed with Star Wars. When searching for a new sitter, I lucked out by meeting a computer science engineering student who loves Star Wars just as much as my son does. Together, they have the most engaging conversations. The sitter is a young woman. While she did have some dolls growing up, her room is filled with Lego and items from Star Wars.

Back in August my son asked for me to please consider being one of three characters for Halloween: Princess Leia, Queen Amidala and Ashoka. I had trouble being a princess or a queen. To encourage me to consider one of these three roles, he began calling me Queen Momidala. I would banter back various lines including “Shaan, I am your mother” using a Darth Vader voice. He’d have this funny expression on his face, laugh and at some point tell me all the parts I was doing wrong. Since this was rather fun, I ordered a female version of the Darth Vader costume. And when it arrived, my son was thrilled and proud. Of course, the costume is a skin tight costume, but it’s a power suit nonetheless. The red light saber was placed on me like the finishing touch of a tiara. And that’s when it all clicked.

In the United States and in Canada, light saber sales are up. They sell like hot cakes. With the new movie coming out, you know it’s going to remain a hot toy. They are fun to play with, my kids mimic the exact movement patterns in battles and beg to attend Light Saber School. From what I’ve seen, light sabers are a source of tremendous power. There are even adult versions of these things that can do some serious damage. But is it really a toy? The science behind making one is pretty interesting. And Star Wars has inspired all kinds of advances in science as well as inspire people all around the world. In the case of our incredibly bright female sitter, she grew up loving Star Wars and is now creating a program designed to teach the art of coding.

As a teacher, I used to swap the names of characters as we read from a picture book for names of children in the class. Their eyes would light up with joy and excitement because suddenly, they were IN the story. There are females in Star Wars but what if we encouraged children to take on a role that appealed to them personally, regardless of gender? What if we reversed the gender roles in Star Wars by having all the males fill the females roles and visa versa? What if Leia became the great Jedi master and not Luke? When I suggested this reversal to my son all kinds of drama unfolded. He was upset with the mere thought of such a thing and thought that it was being disrespectful to the story. When I told him that George Lucas is an incredible writer and that it would be great to have a different version of the story, my son laughed and blew me off. He pointed out that there are some females in key roles and insists this is the story, like it or not. What I was really aiming for is a demonstration in a growth mindset and that as a female, my version of the story would be different.

We all have power, whether we hold a light saber or not. There are different kinds of power and each medium channels its own type. If I walked around with a tiara on my head, I’d be channeling a certain mindset. But the outcome is vastly different. With the use of Star Wars, little girls can be exposed to Science, which is huge, but they need to know the storyline. And yes, it involves a queen and a princess but they are welcome to take on any role of their choosing and rewrite the story.

Our friends’ daughters are like my own. It’s time to swap a bit of princess dresses, tiaras and dolls for at least one or two light sabers, even if they choose pink or purple ones, because it helps them channel a different type of power.

May the force be with you!