How immature can Carly Fiorina get? She sounds like my six year old daughter on a bad day.

Carly Fiorina, doing what she can to set back the cause of women in politics: The California Republican nominee for the Senate refused to apologize to Senator Barbara Boxer after she was caught on camera mocking her hair. Asked about the incident by Greta Van Susteren, Fiorina said, “I was quoting a friend of mine. My goodness, my hair’s been talked about by a million people, you know? It sort of goes with the territory.” She then brought up her battle with cancer, saying, “Especially when you don’t have any. As you remember, I started out with none.” 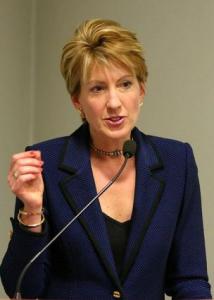 So Fiorina’s friend said the hair comment first and that makes it OK?

Then Fiorina says that she’s been made fun of before, so she’s allowed to make fun of other people? Um, Carly: two wrongs don’t make a right.

Next: It “goes with the territory?” Meaning it’s just fine to make fun of women in power for the way they look? After all, everybody does it.

The point of getting women into power positions is to change that dynamic, not perpetuate it. (Not to mention lead, not follow.)

And finally, Fiorina attempts to switch the issue in a bid for sympathy, playing the cancer card.

Maybe I’ll invite Fiorina over for a playdate, hoping some better manners rub off on her. But I won’t be voting for her for California senator. Who wants mean girls in political office?