Tammy Baldwin (D-WI) and Shelley Moore Capito (R-WV) have introduced “the Healthy Media for Youth Act to “authorize grants to promote media literacy and youth empowerment programs, to authorize research on the role and impact of depictions of girls and women in the media, to provide for the establishment of a National Task Force on Girls and Women in the Media…”

The bill, which draws on research by Girls, Inc. and the Girls Scouts Research Institute, among others, focuses on the most harmful aspects of media, including unrealistic representations of female beauty, sexualized images of young girls and teens, and violence against women as entertainment.

The bill also mentions the Geena Davis Institute on Gender and Media:

The Geena Davis Institute on Gender in the Media found that the majority of female characters in children’s movies are praised for their appearance or physical beauty rather than their personality, intelligence, or other talents, and are often short-sighted and narrowly fixated on romantic relationships that lack substantial connections or courtships. Girls and boys watching children’s programming may vicariously learn that beauty is an essential part of being female and critical for gaining attention and acceptance.

The bill never mentions photoshopping. I don’t get why. It’s already illegal to lie in advertising, so why photoshopping is so prevalent and still permitted is beyond me. I guess it’s because photoshopping’s victims are primarily women, and probably those women are supposed to be grateful they get to eat an extra donut and save money on plastic surgery.

The bill does refer to ‘narrow and restrictive’ gender roles. What could be more narrowing than Filippa Hamilton’s story?

Hamilton is a 23 year old former Ralph Lauren model. She was horrified when she saw the photoshopped images in the ad pictured below right. You can see that the width of her hips is narrower than width of her head. The real 5’8 120 lb model is pictured on the left. Hamilton worked for Ralph Lauren since she was fifteen years old, but said the company fired her after telling her she could no longer fit into their clothing. Ralph Lauren claimed that they let her go “as a result of her inability to meet the obligations under her contract with us.” I wonder if those obligations included avoiding puberty? 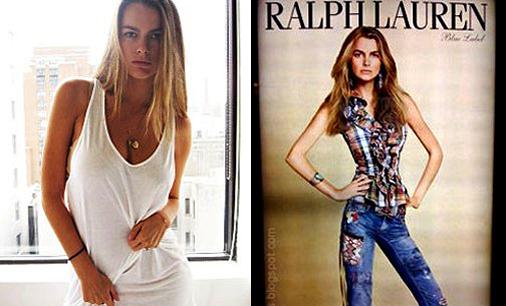 Thank Goodness there’s a brave model speaking out about what really happened to her. Often women are quiet because they’d prefer not to be called fat or ugly publicly or otherwise humiliated into silence. And it doesn’t make it easier to improve things when the US government has a congress that’s only 17% female, only seven female governors, and throughout our entire history, only three women who have ever held the office of Supreme Court Justice.

Thank you to Democrat Tammy Baldwin and Republican Shelly Capito for insisting on media education. A ‘Healthy Media for Youth’ bill gives me hope that a couple representatives in our government understand that when an advertiser alters an image of a woman and then she loses her job for not conforming to it, that’s not trivial, but an issue that affects all girls and the women they will grow into.

Here’s more on the Wisconsin bill from feministing.com

The bill, which has been referred to committee, proposes a three-pronged strategy to combat potentially dangerous media images: Media literacy, further research on the impact of consuming media that depicts women and girls in a less than positive light, and the formation of a national task force, run by the NIH, on girls and women in the media. You can read the whole bill here.

How flipping awesome would it be to know that federal money is going toward “countering the perpetuation and damaging effects of narrow, restrictive gender roles, stereotypes, and expectations, including the sexualization of female children, adolescents, and adults”? How about “teaching youth how to create and use media that contribute to social change, especially in their communities” or “facilitating connections between girls and women, and boys and men, as mentors”?