My kids and I just watched a very cool 30 minute Scholastic video where Taylor Swift talks with students about reading, writing, and feminism. We found the video because my 11 year old entered an essay contest where she wrote one page about the meaning of Swift’s “Shake it Off” which to her (and probably most people) is a song about how to overcome bullying.

A die hard Swift fan, here’s my daughter holding her finally finished (almost finished?) essay and her beloved guitar. I am very psyched Taylor inspired her to think about her experiences with bullying and to write about her feelings. 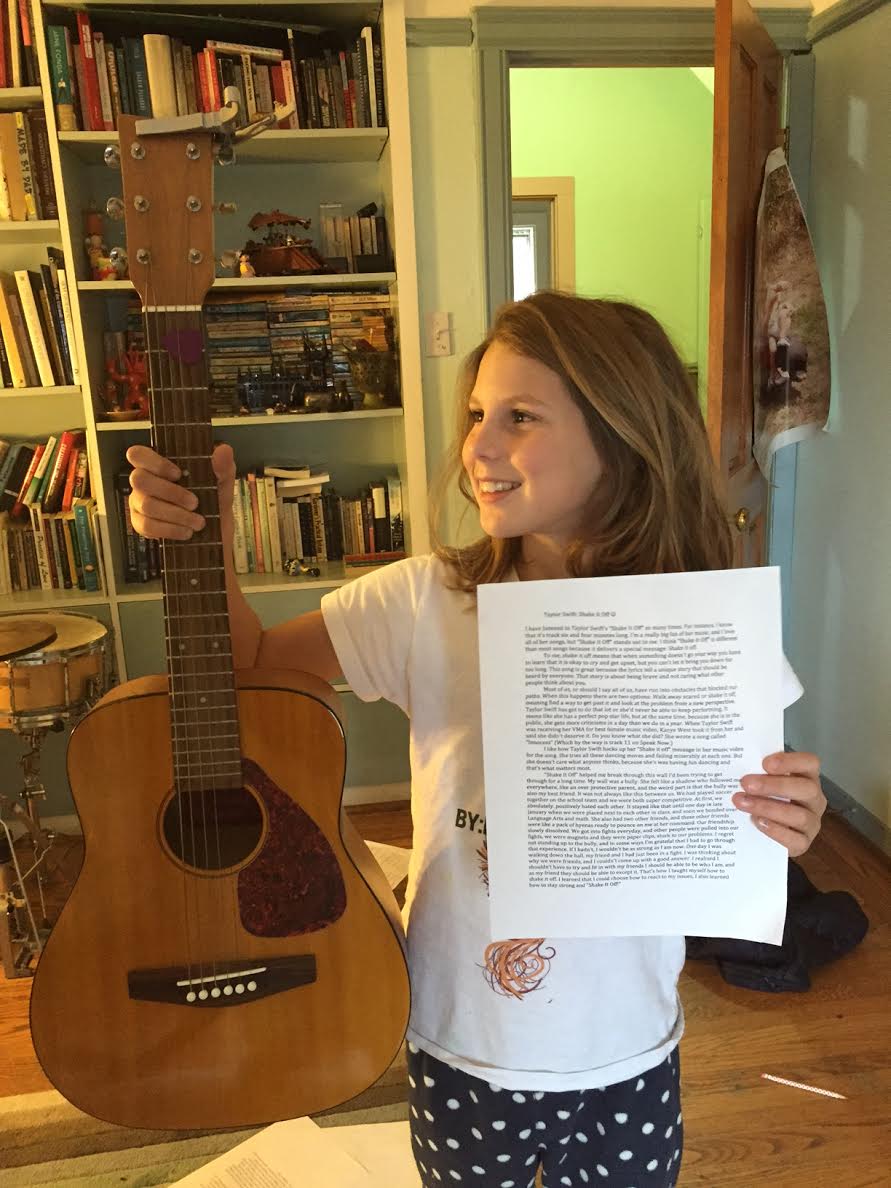 Obsessed with Taylor since 2012 (and always told she looks like her) here she is dressed as her idol on Halloween that year.

I was so happy she picked Taylor instead of a sparkly poofy princess, or witch or vampire with a costume that looks just like a princess. (Her younger sister in the background is Batgirl. Unfortunately, she has since realized Batgirl hardly exists in the world and has now lost interest in that character. Sad!)

I can’t believe we hadn’t seen this Scholastic/ Swift video! It’s so good. You must watch it with your kids. Swift is sitting around with a bunch of students and more students are Skyped in. What I loved is that first and foremost, Swift defines herself as a writer. I really appreciated my kids hearing Taylor say this because they think of her as a pop star. Taylor says that she would never want to get on stage and just sing someone else’s songs. She recommends journaling. After introducing the kids, Taylor opens the video with this statement:

I’m really excited to talk to you about reading and writing because I wouldn’t be a songwriter if it wasn’t for books that I loved as a kid and I think that when you can escape into a book it trains your imagination to think big and to think that more can exist than what you see. I think that’s been the basis of why I wanted to write songs and why writing became my career.

What’s the first question, from a 11 year old boy?

I saw that you liked the Emma Watson video about feminism, and I wanted to know what female characters influenced you in literature?

Can you see why love this video? Watch it now with you kids and find out what Taylor says! Here’s the link.

If Taylor Swift is boy-crazy, is Dylan’s ‘Idiot Wind’ confessional?

I admit it, I loveTaylor Swift’s ‘Red’

Taylor Swift sings her way from victim to hero, triumphs at Grammys