Magazines and newspapers are dying left and right, the whole publishing industry is imploding, yet Good Housekeeping lives on? It survives not only to give women crucial tips on vacuuming, ironing, or what Febreeze actually is, but to produce a commemorative “125th Anniversary Collector’s Issue” graced with the creepiest cover photo of Michelle Obama I’ve ever seen. 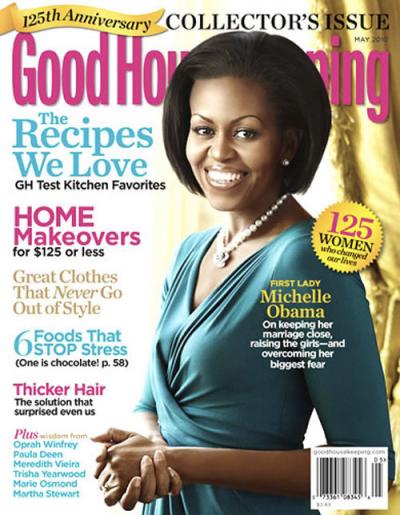 This from Jezebel’s Jessica Coen:

The entire bottom half of Michelle’s face seems to have been replaced, her forehead has been nicely tightened, and the entire right (our left) side of her face seems to have scored some extreme chiseling. A solid helmet head and weird lighting finish off her look.

Michelle Obama is a stunning woman in every way– why did Good Housekeeping transform her into a waxy, Stepford wife, lips and teeth bossed and glossed, hands clasped primly just under the appropriately wifey headline: “Keeping her marriage close, raising her girls and overcoming her biggest fear.”

I’m so tired of the media’s abuse of first ladies, forever handicapped by that prissy label. When a woman finally becomes president, I can guarantee her “spouse” will never be referred to as the “first gentleman” without irony.

And on a day even further into the future than the debut of “Madame President,” people will look back on how women were photoshopped into drag queen aliens and be completely appalled this was considered “attractive.” The only modern invention more disturbing than these computer altered coverwomen, is the transformation that happens when a woman gets hired by Fox News. For more on getting “Foxified, see this post.

Today Lucy called me chubby. I told her what I always tell her, “There’s nothing wrong with being chubby. People come in all sizes. Some people are small, some are big, some have dark hair, some have yellow hair. People are different.”

She said,”You’re the only person in the whole world that thinks that.”

The first time I heard her call someone fat, it was her father, about six months ago. So I said my line, “There’s nothing wrong with being fat.” And my husband looked at me and said, “You think I’m fat?”

No one would call either of us fat or chubby unless she was a kid who thought she was saying a bad word. Unfortunately, Michelle Obama’s obesity campaign is exacerbating America’s weight obsession when she talks on national TV about putting her young daughters on a diet. It’s a continuation of the unrelenting focus on female body sizes and what they should look like.

For example, there’s no step towards health or progress of awareness that tabloids have become as obsessed with anorexic stars as they are with fat ones. It’s another headline to sell magazines, a popular thing to yell out for attention whether you’re a magazine, a first grader, or a first lady.

It drives me crazy when people whisper, “She’s a size double zero!” Why don’t they headline that the actual clothing sizes have gotten drastically smaller. There was no double zero ten years ago. There wasn’t even a zero. You rarely saw a size 2 in a store. I know this because I am a petite person. I am the same size now that I was then but now it’s a different number.

I wish Michelle Obama would focus the nation on empowering women, and healthy weights would follow. But I guess that’s too radical and first ladies need causes that are non-threatening, preferably child centered. At least now she’s got Laura Bush as her role model.

(Please also see my post on girls and diets and also here.)