Yesterday, I posted about the excellent and amazing Disney made for TV movie: “Avalon High.” The story is about the reincarnation of heroes and villains from the King Arthur legend of Medieval times to a contemporary high school in the U.S. The protagonist of the show, Allie– brave, smart, strong, and kind– turns out to be…King Arthur. With that gender flip, this Disney movie shows girls and boys that females can be heroic and at the center of the action.

SPOILER SPOILER
In the book, the Allie character is NOT King Arthur, but the Lady of the Lake, who gives Arthur the powerful Excalibur. Will is Arthur. The twist is that there are hints she is Elaine (her character is called “Ellie” in the book) the weepy victim of unrequited love dumped by Lancelot. So, she turns out to be a crucial element in Will’s development as king but she doesn’t become king herself.

My daughter Callie and I both loved this movie for the same reasons you did, and we were crowing with delight at the changed ending!

As I wrote back to Leslie, I am totally shocked. I can’t think of another time– tell me if you can– where a kid’s book has been changed by the kid’s film (not grown up film) to be more feminist.

I am amazed Disney did this. Really. And also, Meg Cabot, the writer: WTF? Lady of the Lake? She is not cool, powerful, or that important in the story. If you are seeking remnants of evidence of female power, she will do, but obviously, King Arthur is the central figure in the legend. The best line of the movie is when Mordred says to Allie something like: “You? I thought maybe you could be Lady of the Lake, but Arthur?”

The translation of that quote goes way beyond the specific characters of Arthur and Lady of the Lake: Mordred is saying that a girl can’t be a hero and Allie shows that villain how wrong he is. I love how that is done here, through the characters and action, and not in the usual, boring way where the bad guy says something to the effect of– ew, you’re a girl. That, to me, kind of reinforces sexism: we’re all supposed to get the insult is wrong but too often, we don’t see it in the story beyond a moral/ ethical issue. Here, we get it: Don’t underestimate me. I won’t underestimate myself either.

It’s interesting because right after we saw the movie, I went to Amazon to buy my daughter the book, and I didn’t buy it. I wasn’t sure exactly why I didn’t want to. The cover didn’t grab me. I know, don’t judge a book by its cover, but  Meg Cabot’s other books looked very pink and seemed to be about girls who were mostly interested in boys. Of course, that could easily be the marketing department who designs the cover. Maybe I thought I needed to do more research, and I didn’t have time right then. Whatever the reason, I didn’t click “buy.” Thank goodness Lesley commented because if I got that book, I would have been so pissed and disappointed. Though Lesley is more considerate than me with her spoiler alert, I feel it is my duty to warn you : )

I NEVER thought I would say this but KUDOS TO DISNEY. I am quite curious to know the story behind this adaptation. And also, Hollywood: Are you listening? Here is an example of how to use some imagination and innovation– 2 things you are, after all, supposed to be known for, supposed to encourage– to remake a classic without girls going missing. This gender flip is not about “girls being boys” or “girls acting like boys” or any other ridiculous justification to keep girls on the sidelines because that’s just where they belong as we recycle the same narratives, generation after generation.

After I read Lesley’s comment, I saw something quite incredible posted by Sara on Reel Girl’s FB page. Here is the new Rolling Stone cover, and quoting Vulture: “Why is Tina Fey Lois Lane?” 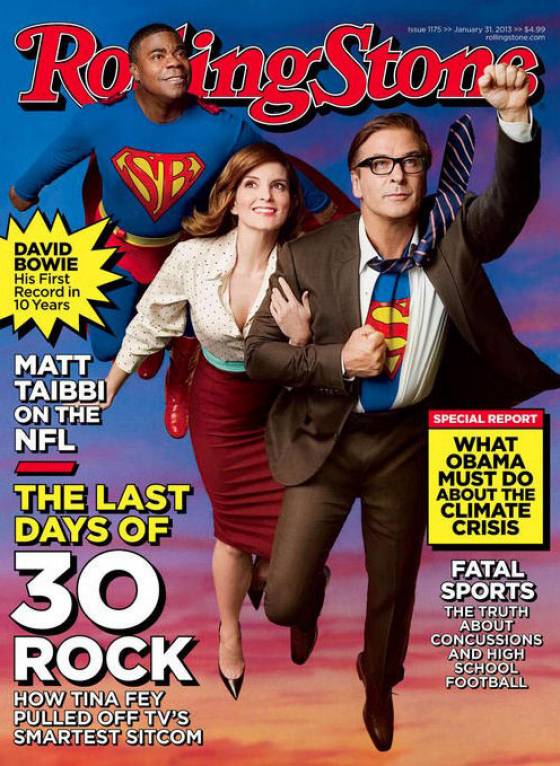 Why is Tina Fey riding bitch? This same old image of the male driving, the girl along for the ride is ubiquitous in the imaginary world. Why did Rolling Stone put Tina Fey, one of the most successful women in the world, in that position?

Tina Fey co-hosted the Golden Globes to universal praise. Her seven-season critical darling 30 Rock — which is still really damn funny — is ending in two weeks. She has seven Emmys, two Golden Globes, three Producers Guild awards, four SAG awards, and a Mark Twain prize. She’s synonymous with contemporary humor. Out of curiosity, Rolling Stone, what would it take for her to be Superman on the cover?

Do you see how fucked up it is for women to continually contort themselves into the sidekick? The distortion is not in the gender flip, in the rare times it is actually made, but in continually keeping women secondary to men. Our cultural imaginary (to borrow a phrase from Lucy Irigaray) is so warped that Tina Fey is cast in the sidekick/ girlfriend role here. If Tina Fey isn’t a superhero, I don’t know who is.
The real world and the imaginary world are endlessly intertwined. What is happening to Tina Fey, on Rolling Stone, happens every day to all women everywhere in the world: Move over lady, a man wants to fly.
Who would have thought that Rolling Stone magazine would be so pathetically conventional and a Disney made for TV movie could be so radical?