I’m reading The Golden Compass and I absolutely love it. The main character is Lyra. She is fierce, smart, and brave. The villain is also female: Mrs. Coulter. She’s brilliant, beautiful, and wicked.

There are several indirect references to sexism in the book. When Lyra first meets Mrs. Coulter she is shocked that the woman is a scholar because female scholars are few and dowdy. Lyra notes many times that the male scholars get access to special rooms. Just like in the real world, right? We all know real life Oxford is sexist as hell. So what’s wrong with referencing that sexism in the story?

There are further parts of the story that make note of sexism. Only the male gyptians are allowed on the boat to recover the children. The female gyptians argue they should be included, not to battle, but because someone will need to be there to look after the children once they are rescued.

Of course Lyra, just a child, goes and battles and is the heroine of the story. But I’m wondering as I read, are there imaginary worlds where there is no sexism? I would love girls and boys to be exposed to this fantasy much more than they currently are. Before we can realize it, we’ve got to be able to imagine it. We get to that surprisingly little if at all.

Obviously, the challenge is that writers exist in real life sexist worlds so as Luce Irigaray wrote, even creating a “female imaginary” can be practically impossible to fantasize about. Though, honestly, it doesn’t seem like it should be that hard. Remember, battles are symbolic and metaphorical as are magical powers.

Just put a female front and center. Have some other females helping her out, they don’t have to be human, just female. That’s a start. Maybe the Oz series would fit? It had Glinda but a lot of makes around Dorothy. Alice in Wonderland? Same thing, but I think that would fit, at least the movie version with the White Queen. Is she in the book? There is the Red Queen, though she’s evil. I like evil female characters but I like good ones as well.  The only thing that bums me out about Tim Burton’s Alice, which I loved, was that the story was bookended with a wedding scene. Like so many modern day feminist heroines, Alice’s independent act is that she refuses to marry who she is supposed to. But why mention marriage at all?

Update: Commenters and  I agree on these: Oz, Wonderland, and Miyazaki’s imagination 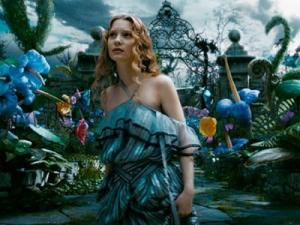 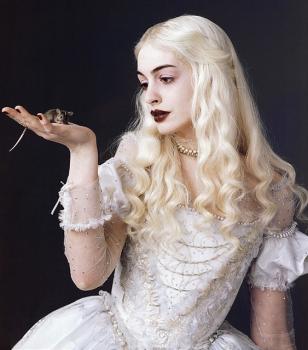 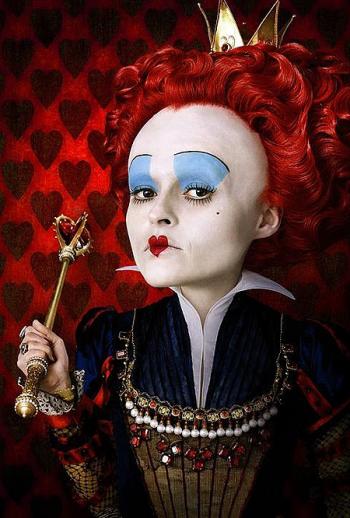 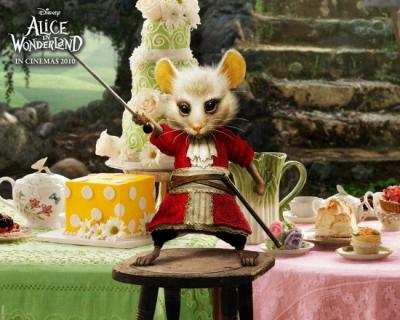 Pink was not always the color of girlie girls. Once upon a time, pink was associated with boys because of its closeness to red, considered a hyper-masculine, power color. Blue was feminine and the color of the role model for all good girls: the Virgin Mary. Animated girl icons Cinderella and Alice in Wonderland were always shown in blue.

Here is some great art work by JeongMee Yoon.

He writes: “The saccharine, confectionary pink objects that fill my images of little girls and their accessories reveal a pervasive and culturally manipulated expression of femininity and a desire to be seen. To make these images, I arrange and display the cotton – candy colored belongings of several children in their rooms.” 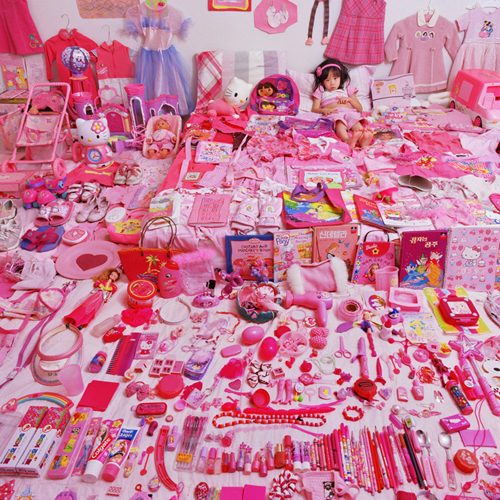 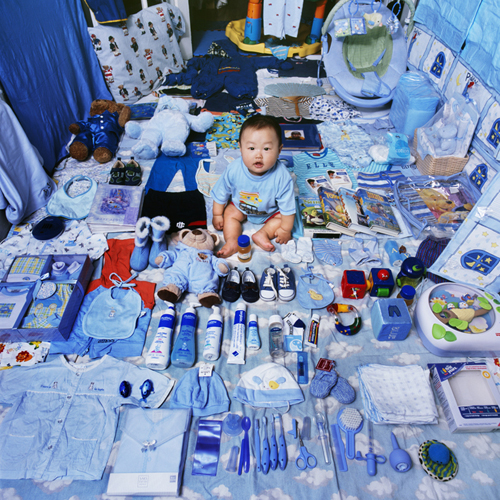 This week’s People Magazine has a “sneak peak” at Tim Burton’s Alice in Wonderland. Johnny Depp, as usual, pictured front and center as the Mad Hatter. To his left, a Dodo, to his right, Helena Bonham Carter as the Red Queen. At least there’s one female, but where is Alice in this promo for her movie???

Please check out the comments I got under my last blog entry about Alice, also mentioning Up and Fantastic Mr. Fox and the lack of females. The commetator thought these movies were not sexist, because there was a Mrs. Fox and in that movie, a kid also had a love interest who was a girl. Can you imagine a movie called Fantastic Ms. Fox where all three villians were female as was Ms. Fox’s whole possy? It would be some crazy feminist movie.