“Mr. Peabody and Sherman” repeats the same old sexist pattern of so many kids’ movies where male characters get to star while females are stuck on the sidelines, in supporting roles.

Let’s start with the title of the movie: “Mr. Peabody and Sherman.” Note this title features the name of not one, but two, male stars. That’s right– “Mr. Peabody and Sherman” is yet another father-son story. While movie studios strategically switched the title of “Rapunzel” to “Tangled” and “Snow Queen to “Frozen” to hide female stars, the marketing for “Peabody” showcases males, and I’m not only referring to the movie title. I live in San Francisco, and here’s the poster that my three daughters and I see all around town:

Major close up of two male stars. Compare that to “Frozen,” one of the rare children’s movies to feature not one but two female protagonists. Anna and Elsa get buried in the snow. The marketing implies that Olaf, the snowman, is the star of the movie. 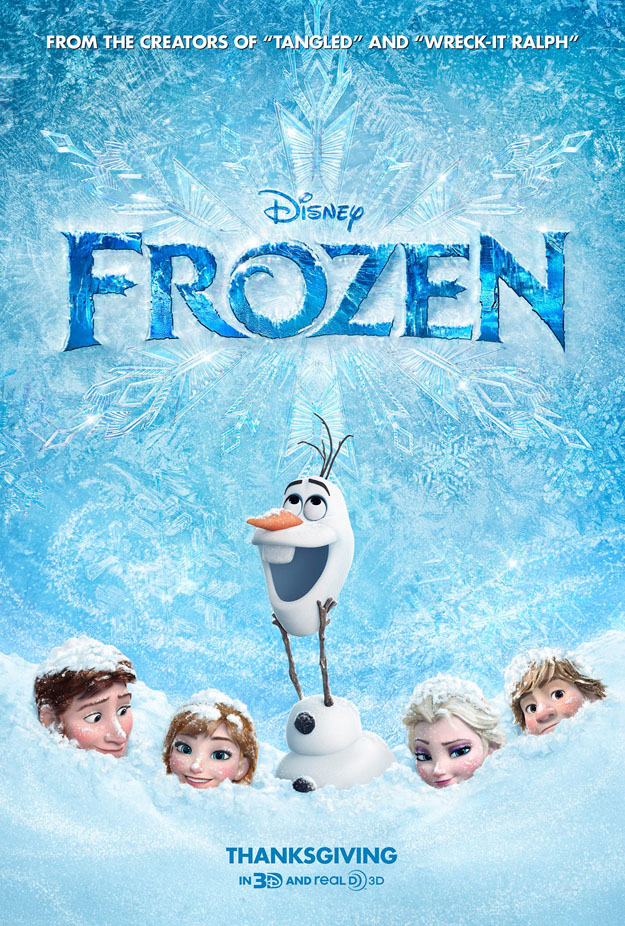 A major problem with this sexist marketing is that even if your children don’t see the movies, they see the posters. From this media, kids see that boys get to be front and center while females get sidelined or are invisible all together. The repetition of these gendered images teaches all children that boys are more important and get to do more things that girls.

Like most children’s movies, “Mr. Peabody and Sherman” features a Minority Feisty. The Minority Feisty is “a strong female character” (or two or three) who plays a crucial role in helping the male star achieve his quest. There may be more than one Minority Feisty in a movie, but there are always a minority of female roles compared to male roles, even though girls are one half of the kid population. The purpose of the Minority Feisty is to make parents overlook the lack of female protagonists, because, hey, at least there’s a strong female in the narrative. To really get how sexist this gender ratio is, imagine gender flipping the characters. How likely is a it that a studio would put out a movie called “Ms. Peabody and Sharon” with a close-up of the two female stars on the poster? When is the last time you saw a children’s movie advertised with two female stars in the title and a just two females in the poster all around your town or city?

I blog a lot about a particular trope in children’s media that makes me crazy called “riding bitch.” While male characters often soar through the sky on all kinds of magical creatures, from dragons to hippogriffs, female characters usually are put in the passenger seat, not steering or deciding where to go, just along for the ride. Even though I’ve noted this trope endless times, I was shocked by how sexist it is in “Mr. Sherman.” Here’s what happens in the movie. Mr. Peabody, Sherman, and Penny go back in time to visit Leonardo da Vinci. Penny sees da Vinci’s flying machine and, as the Minority Feisty is wont to do, she hops on. Sherman is afraid but follows. Penny flies through the sky and whoops in delight while Sherman shrieks. My 7 year old daughter saw this scene in the preview and told me about it, she was so excited. But here’s the bummer:

Yes, Penny starts out flying the machine, but then she encourages Sherman to try. He refuses and she repeatedly tells him that he can do it. When Sherman continues to shy away, Penny lets go of the steering wheel, and they almost crash before Sherman finally takes control. This is the length the female character goes to put the male back in the driver’s seat. Sherman flies and he’s great at it, until Mr. Peabody sees him and says. “Sherman! You can’t fly!” reinforcing that all Sherman needed was a good girl to believe in him. When Sherman crashes, da Vinci runs up to Sherman, who is with Penny in a pile of debris, and says, “You are the first man to fly!” At no point does Sherman say, “No, actually Penny is the first woman to fly.” ARGH. What do my kids– and all kids– learn from this narrative? The same thing they learn from the whole goddam movie: it is the role of the female to help the male, to make him feel good and secure in his role as star, while she is happy and content as the sidekick; that’s where she belongs.

Lean In and Girl Scouts just started a “ban bossy” campaign which I love. But how much hope do these organizations have of getting a different message across when narratives like Penny’s are mass-marketed to little kids?

There’s a lot more I didn’t like about gender in “Mr. Peabody.” Penny goes back in time, not to meet a suffragist or Joan of Arc or Queen Elizabeth, but to be the child bride of King Tut. That narrative is all about her wedding. UGH. If they wanted to do ancient Egypt, couldn’t she at least have encountered Cleopatra? Time and time again, Penny is a damsel in distress/ Minority Feisty who gets to play a small– but crucial role– in her own rescues, and is ultimately saved by Sherman again and again.

The last line of the movie pretty much sums up how males are front and center while girls go missing. Mr. Peabody, watching Sherman go off to school, says, “Every dog needs a boy.” What about a girl? What about at least saying “kid” or “child”? Instead, females don’t exist at all.

I get that this movie is a remake but that’s no excuse to recycle sexism for a new generation of kids. We had three Shrek movies (the first, of course, based on an original story) and in each one, Fiona, a Minority Feisty, gets a smaller part. This is a typical interpretation of “remake.” By the last Shrek movie, the narrative devolves into another father-son story (co-starring Justin Timberlake.) There was a spin off, and still, it was not Fiona, but Puss In Boots who got his own solo movie, featuring the Minority Feisty Kitty Softpaws. When will Kitty get her own movie? Ever? Do your kids even know who she is? The other problem with remakes is that when girls star, in each new incarnation characters like Strawberry Shortcake, Dora, the Powerpuff Girls, get “makeovers” where they get less powerful and more sexualized.

Once again, I write this: I would not have a problem with “Mr. Peabody and Sherman” if it were just one narrative. The problem is the repeated pattern of sexism that kids see again and again and again. Children learn through repetition, and I am beyond sick of this sexism marketed to kids. If you want a refresher of how many movies for kids star males versus how many star females take a look at Reel Girl’s Galleries of Girls Gone Missing From Children’s Movies:

19 thoughts on “Every dog needs a boy: ‘Mr. Peabody and Sherman’ continues pattern of sexism in kids’ movies”