When Pixar writers (Robert Baird, Daniel Gerson, Dan Scalon) showed the script for “Monster University” to producers, or execs at Disney, or whoever you go to up and down the chain of command to get the green light, did it occur to anyone, anyone at all, that making a movie about rival fraternities might make girls, half of the kid population, feel a tad ignored?

Here’s a pic of OK, the geek fraternity on campus, featuring our buddy-stars: Mike and Sully. “Monster University” centers on this group. 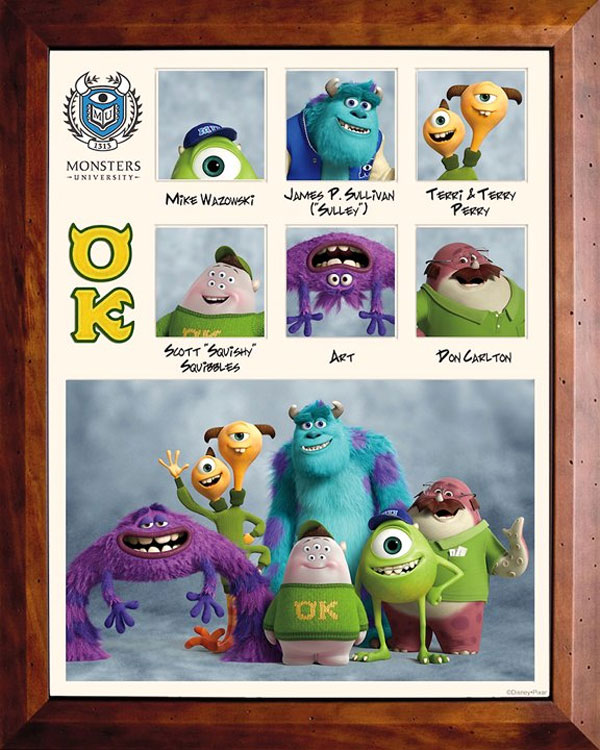 Here are the rivals of OK, the BMOC frat, ROR, led by Johnny Worthington, the one with the horns.

Rival frats. I am not kidding. That’s what this movie is about. So here on Reel Girl, I don’t have to even analyze or point out how or why this narrative is sexist. After watching it, I’ve got to conclude that in spite of the token “Brave,” Disney/ Pixar really doesn’t give a shit about including females in its narratives in a significant way.

Like most animated movies today that star males, “Monster University” features an excellent Minority Feisty. Dean Hardscrabble is played by Helen Mirren, and she is a bad ass, terrifying and complex. I loved her. I wish she had more lines and more scenes. 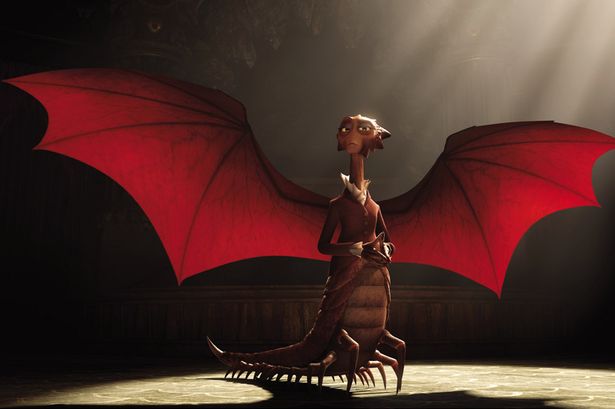 What do you think the chances are that Dean Hardscrabble will get her own spin off movie? (Sort of like how Puss In Boots got his own movie after no less than 3 Shrek movies.) Perhaps Hardscrabble will get a prequel, like “Monster University,” where we see how she grows up, changes from a scared little kid into the fierce and powerful monster she is? Along with the help of a courageous and devoted team of females, of course. See that film coming soon to a theater near you?

I’m also a fan of the librarian, a Minority Feisty who has a brief but impressive part.

Another Minority Feisty I liked is Claire Wheeler, the Greek Council President.

Claire isn’t fabulous, but she can be funny. She doesn’t do anything stupid or offensive.That area is totally covered with the look, name, and poses of the PNK (get it?) sorority: pink and purple, mini-skirted, furry boot wearing girls. I dread the toys and sippy cups.

“Monster University” is all about a competition but you hardly notice or care when females get eliminated, as they all do. We don’t get a chance to get attached to any of the female competitors.

There is a cooler sorority, HSS. Its role in the movie is even smaller than PNK, and it gets eliminated earlier. Again, the event is hardly noticed except that Mike and Sully’s frat advances. 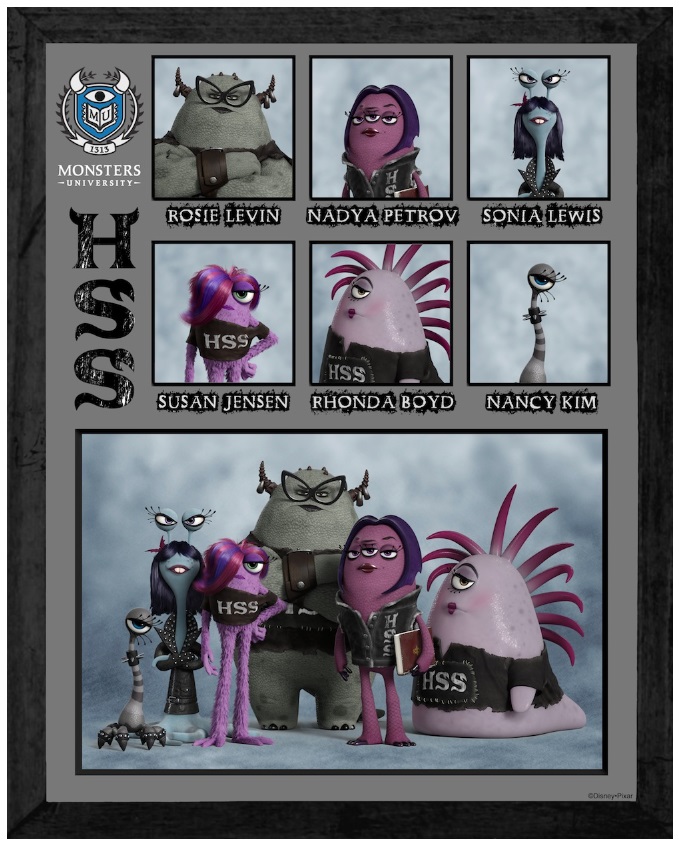 A Minority Feisty I hated? Ms. Squibbles, Squishy’s mom. Throughout the movie, she is shown in curlers and a housecoat, cooking, doing laundry, or driving a minivan.Think the “Ms.” is feminist? Nope, the moniker is to elucidate her single status. I didn’t think Pixar could get any more gender cliched, but at the end of the movie, Ms. Squibbles actually gets engaged (to her son’s frat brother, no less.)

Before the movie even starts, Ms. Squibbles shows up in an ad for Swiffer. That’s right– a cleaning product. All the males are sitting on the couch watching football when a hot dog with ketchup gets dropped on the floor and Squishy says: “You guys, my mom just cleaned this place!” The ad could be worse, I suppose. Squishy cleans up the ketchup himself, and Ms. Squibbles dirties the floor up again cheering the team. It’s got that tiny speck of feminism within a sexist framework that we’re supposed to be grateful for. Here’s the ad.

I haven’t seen any Minority Feisty from the movie pictured on posters around San Francisco, where I live. Most show Mike, but some show Mike and Sully. The Leapfrog educational games also feature Mike and Sully. 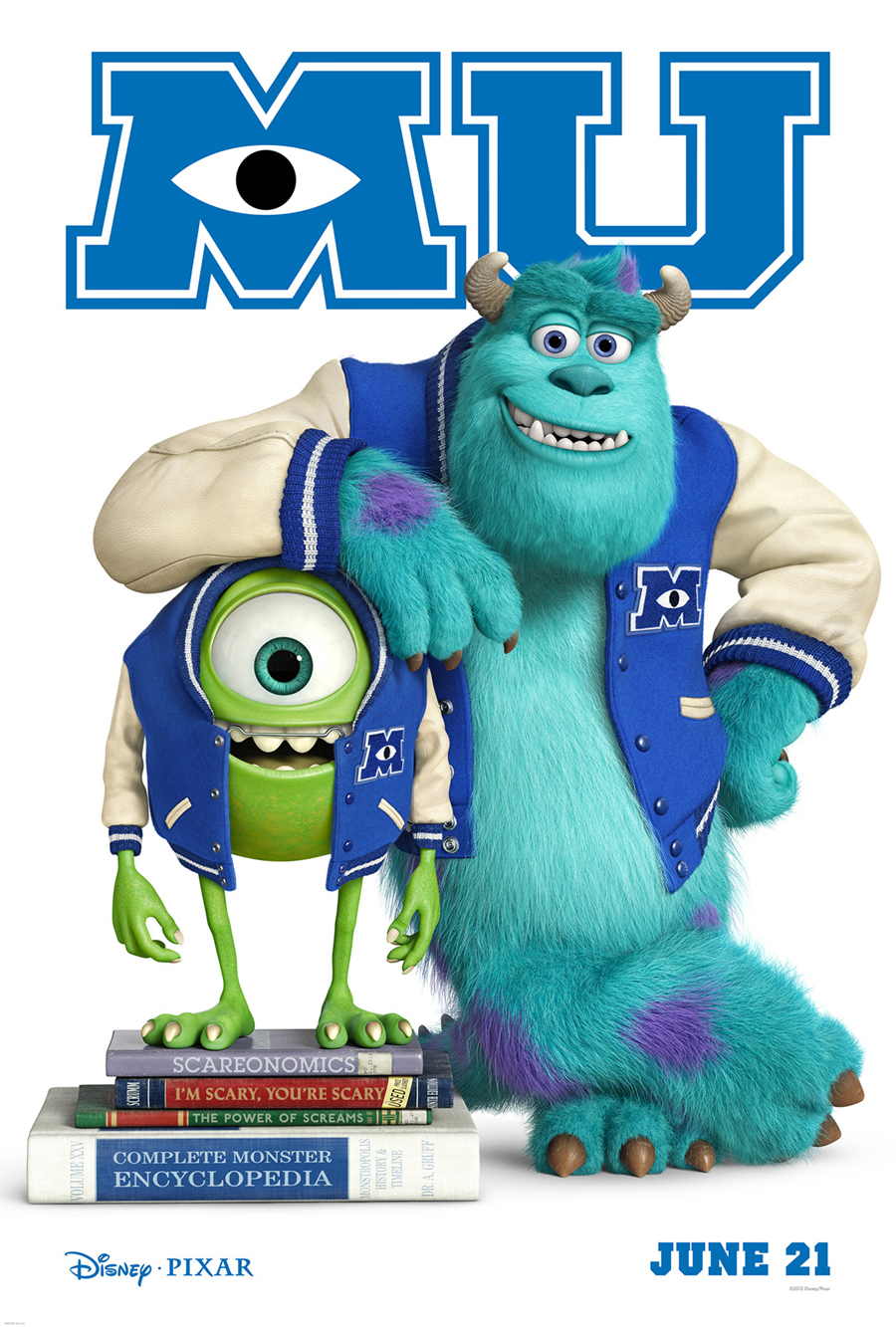 I’m bottom feeding for images to be grateful for in “Monster University,” but I found a few. There are pink and purple male monsters in this movie. There are also male monsters with eyelashes. Sometimes, I couldn’t tell if a monster was male or female until she spoke, a highly unusual situation for an animated movie, even one about cars or robots or planes or fish or monsters, of course. Thanks a lot, Pixar/ Disney. My three daughters and I are super grateful.