A new Cheerios ad featuring an interracial family is receiving such a hateful reaction that the comment section on YouTube had to be closed. Here’s the ad.

Once again, the internet shows us that hate is alive and well in 2013.

While I applaud Cheerios for showing a diverse family, what’s with the gender stereotypes? Just imagine this: the mom is lying on the couch while the dad is talking to the kid about health. Think that’s nitpicking? Since creating Reel Girl, I’ve become quite the connoisseur of cereal and gender roles and females rarely appear in marketing unless they’re promoting health. (Also, I own an entire book about that dad stereotype called Bastard on the Couch.)

Here’s a typical example from Cocoa Pebbles. There’s Fred, the star, in close-up, right on the front of the box. Above, Fred and Barney drive cars, beckoning kids to play a game. 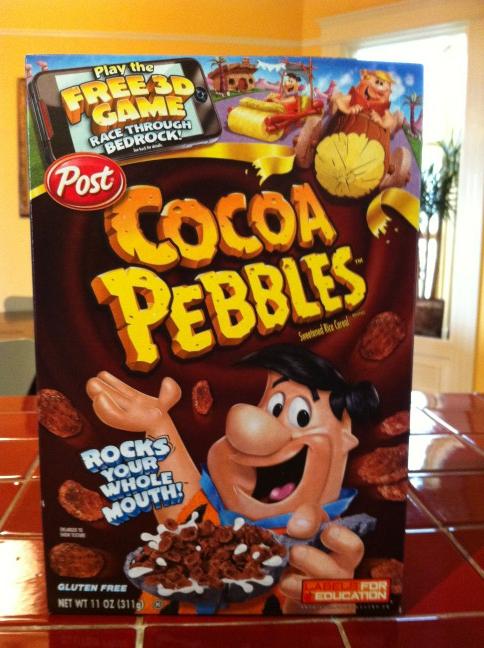 The game on the back shows Fred and Barney driving, racing, and having fun together. Boys will be boys.

Is there a female anywhere on the box? My kids and I actually came up with a game called Find the Female on the Cereal Box. Children are obsessed with cereal boxes, and this activity seemed like a viable way to help my three daughters defy the incessant training to always focus on the males. So, we found Wilma, literally marginalized, tiny and on the side of the box, concerned that kids aren’t getting enough Vitamin D.

If these images were a couple of varied gender roles, it wouldn’t matter, but cereal marketing, for the most part, turns out to be incredibly sexist. All of the mascots on children’s cereal boxes are male. Check out this gallery. Girls are half of the kid population and half of cereal eaters, so why do females go missing on cereal boxes for kids?

Give Cheerios a break, you say. The TV ad features a girl. The mom appears to be working, not grinning madly or having multiple orgasms over vitamin content. And anyway, regular, old Cheerios doesn’t even have its own mascot, so what’s my problem? Perhaps, I would’ve given Cheerios a break today if I hadn’t just blogged about how sexist the Cheerios box is. Cheerios doesn’t have its own male mascot, it’s true, so what does it do? Borrow all the male characters from the movies and then give kids a sexist game to play with them.

Here’s the Cheerios box that my husband just brought home for our kids.

On the front: Shrek, Puss In Boots, and Donkey, 3 male characters from “Shrek.” A movie starring a male, titled for the male, and spawning not only two sequels but also, a spin off. A spin off featuring Princess Fiona? Nope, it was Puss In Boots who got his own eponymous spin off movie, a buddy movie costarring his BFF Humpty Dumpty. Kitty Softpaws is a cool female  character in that movie, a Minority Feisty who I loved, but where is her own movie, titled for her? Where is she on a cereal box? Have you even heard of Kitty Softpaws? Do your kids know who she is?

Here’s my 4 year old daughter after playing “Find the Female,” showing the back of the Cheerios box. 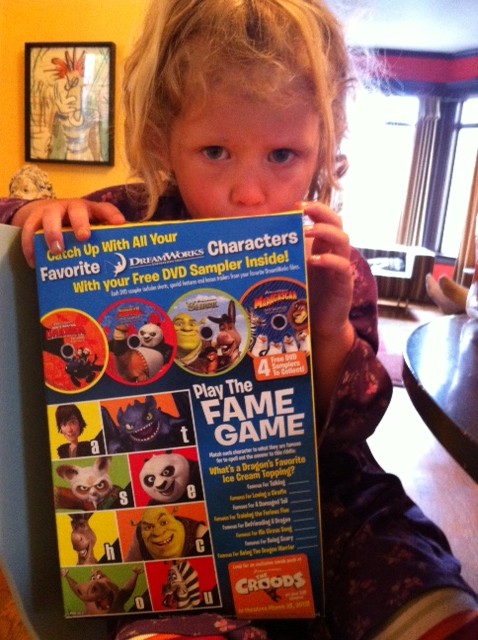 Here’s the answer key to Find the Female: “How to Train Your Dragon,” the first DVD, pictures a boy and his male dragon, the two stars of that movie, but you do see a girl behind the boy, “riding bitch” a repeated, sexist motif in kids’ media. The rest of the DVDs feature no females and 6 male characters, with”Madagascar” leaving out the Minority Feisty played by Jada Pinkett Smith. Smith’s hippo does show up in the “fame game,” 1 female to 7 males. The goal of that game is “match each character to what they are famous for.” (And here again, the problem of Kitty Softpaws vanishing into obscurity.) Characters in Cheerio’s game are known for “Training the Furious Five” or “Being the Dragon Warrior.” Hippo’s claim to fame? “Loving a Giraffe.”

Cheerios is teaching my kids sexism with this box, showing them that males are the important ones, the stars who get to have fun, while girls are in the minority, limited to supporting roles, stuck on the sidelines. So, Cheerios, good job with being a trailblazer on race, but please put some daring female characters on your box, front and center; take sexism out of your games, and while you’re at it, show us a mom on a couch.

7 thoughts on “Good job on race, Cheerios, but what’s with the gender stereotypes?”